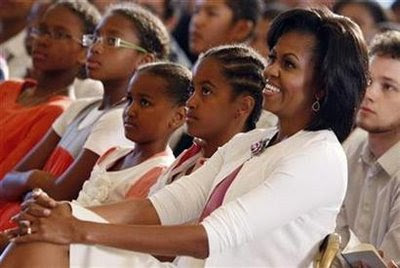 Despite declaring national emergency in response to H1N1 outbreak, President refuses to allow his own children to be inoculated with controversial shot

Congressman Ron Paul has questioned why, despite his efforts to encourage the general public to get vaccinated against the H1N1 virus, President Barack Obama has refused to allow his own daughters to take the swine flu shot.

Despite the fact that Obama on Friday declared a national emergency in response to the H1N1 outbreak, he apparently doesn’t deem it enough of a threat to have his two daughters vaccinated against the virus.

Such double standards have led media pundits to call for Obama to get his daughters vaccinated on live television, in an effort to encourage American parents to do the same for their kids. The swine flu vaccination program, which was initially intended to be a “mass” inoculation covering the entire population, has been rejected by a majority of Americans who harbor deep suspicions about dangerous additives contained in the vaccine such as mercury and squalene.

In a Campaign For Liberty video message, former Presidential candidate Ron Paul labeled the vaccination program a “failure,” and slammed Obama for failing to follow the same advice he gave to the nation.

“It’s interesting to note that the President’s children have not gotten their shots and the explanation for this is it hasn’t been available to them – now that’s a little bit hard to buy when you think that probably anything the President wants can be available for their children,” said Paul, adding, “So in a way he’s made his decision not to give his children these inoculations – so if he has freedom of choice on this, I would like to make sure that all the American people have the same amount of freedom of choice.”

Others have echoed similar sentiments. “Surely if there is a national emergency and if the President and First Lady of the United States wanted flu shots for their daughters, they could get them. It is certainly connected to our national security right? I mean the president needs to have his wits about him 24/7 not worrying over sick children. Could this instead be yet another case of “do as I say, not as I do” from the Obama administration?” writes Cathryn Friar.

Paul compared Obama’s hypocrisy to politicians who lobby for the virtues of public education yet in every instance educate their own children privately.

“The biggest champions of public education make sure their kids never get public education, they always get private education where there’s a lot better choices than the kind of system they’re promoting,” said the Congressman.

Obama certainly isn’t stupid enough to inject his own kids with the same toxic soup that he encourages the idiot public to receive, and will probably be keen on getting access to the special additive-free swine flu shots produced by Baxter International that have been made available for the elite.

As Spiegel Online reported earlier this month, German Chancellor Angela Merkel and government ministers received a mercury and squalene-free H1N1 vaccine. “The Vakzin [vaccine] does not contain disputed additives — contrary to the vaccine for the remainder of the population,” reported the newspaper. Soldiers in the German army were also given the adjuvant-free vaccine.

Employees of the Paul Ehrlich Institute in Germany also received the “green” inoculation after their president Johannes Löwer labeled the vaccine a greater threat than the virus itself. Löwer’s comment came after German lung specialist Wolfgang Wodarg said the vaccine increases the risk of cancer. The nutrient solution for the vaccine consists of cancerous cells from animals.

In the video update, Congressman Paul also warned that Obama’s emergency declaration on Friday was part of a plan to condition people to accept the notion of government as protector and coerce the public into complying with whatever they say, including forced quarantines.

Watch the Ron Paul clip below.

Joy
I am sick of the brain-dead zombies masquerading as intelligent loving people.